Whether outdoors or indoors – mould spores are present everywhere in our ambient air at all times. This in itself is not a problem, as long as they do not settle on surfaces and uncontrollably multiply there . But this is exactly what happens faster than one might expect, because mould is extremely frugal. The step from a normal occurrence in the air to a dangerous spreading on a surface only requires a sufficient amount of warmth, humidity and a few organic nutrients, which can be found almost everywhere. However, the market offers little preventive means. Find out why so-called Liquid Glass makes any surface permanently unattractive to mould spores.

The inadequacy of prevention and elimination

It is astonishing that search engines, when asked about mould prevention, primarily spit out mould removers or tips on room climate. Of course, proper ventilation and heating is extremely important for many reasons, but it cannot be implemented optimally in every situation. In rooms, seasons or regions with a warm and humid climate, this measure alone is often not enough.

Merely acting when the health-threatening infestation of mould has already taken hold cannot be a solution, especially since the mould fibres often spread invisibly deeper in the material than can be combated with superficial removal. In addition, many mould removal agents are not harmless to health themselves.

What is therefore needed is a simple prevention method that can be used everywhere and that gently prevents floating mould spores from settling and multiplying on surfaces . To understand why “Liquid Glass” perfectly meets these requirements, let’s first take a look at what mould actually does on various materials.

Disturbing the mould in its habits

We know a great variety of moulds. About 40 species of them can be harmful to human health. What they have in common is that they are all quite frugal in terms of food and lodging in the accommodation they have chosen. Thanks to its complex metabolism, mould can utilise almost every organic nutrient.

The modest mould even finds food on surfaces that do not offer any organic substances. On glass surfaces, for example, it likes to relish the dust that has settled there.

While removal is relatively easy here, it becomes much more critical with other materials: For example, on wooden surfaces, the mould can feed on parts of the colonised surface itself. On plastic surfaces or seals, on the other hand, it prefers to feed on organic additives such as plasticisers.

It is self-explanatory that in both cases the materials are permanently damaged. However, this does not only happen because of the mould’s food intake. In addition, the excretions of the fungus also attack the surface. Thus, its entire metabolism causes destruction of the materials.

Effective mould prevention must therefore, on the one hand, deny the spores access to the coveted micronutrients and, on the other hand, protect the surfaces from the fungus’ secretions. Various anti-mould coatings attempt to do this, but bring with them further problems:

Many of the agents themselves contain questionable toxins that can harm humans, animals and the environment. For example, there is talk of allergenic or carcinogenic contents, of possible eye or respiratory damage. Due to the permanent release of an active ingredient, many anti-mould paints also lose their effect quite quickly. In addition, they often change the appearance, feel or breathability of a surface.

Long-lasting protective barrier without side effects

Instead of plastering surfaces or counteracting mould infestation with harmful toxins, the liquid glass barrier from Nanopool intervenes in the habits of the mould in a gentle and environmentally friendly way:

The basis of the internationally proven NP® products is a high-performance raw material that forms an ultra-thin, elastic and breathable glass-like layer on materials of all kinds. Five hundred times thinner than a human hair, the functional barrier is imperceptible to the naked senses, but bonds firmly to the treated surface and endows it with repellent properties.

This counteracts a potential mould infestation in three ways:

1. On the one hand, the spores can no longer access the nutrients of organic surfaces, as these remain inaccessible to the fungus under the barrier layer, which is around 5 to a maximum of 100 nanometers thin.

2. On the other hand, dirt and dust particles do not adhere permanently to the superphobic coating, so that this food source for the mould spores is also removed from the menu.

3. Should the fungus settle nevertheless for a short time – which is hardly possible due to the repellent properties of the liquid glass layer – the treated material is protected against the harmful excretions of the fungus by the barrier.

The NP® coating can be applied to almost any absorbent and non-absorbent surface without any protective equipment simply by spraying or wiping:

No matter if wood, textiles, masonry, tiles, joints or seals – the functional barrier is effective for a long time in indoor and outdoor areas without releasing substances into the environment.

Thus, NP® liquid glass is a permanent and completely harmless method for effectively preventing the settlement of mould spores that are everywhere in the ambient air, even in areas that are difficult to ventilate. 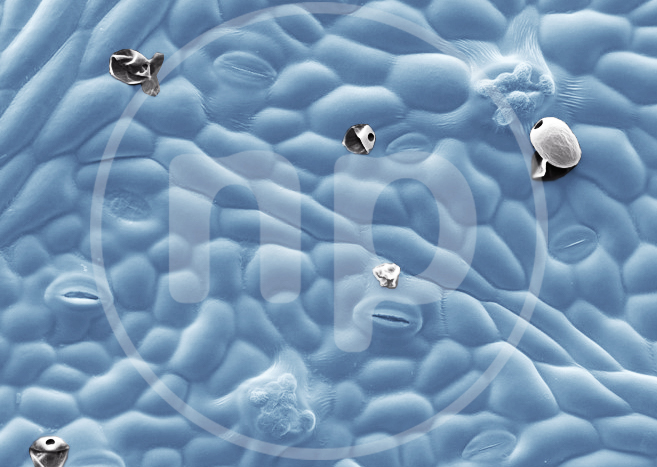 The original image of an organic surface, magnified many times using the scanning electron microscope (SEM) shows: The treatment by NP® Liquid Glass denies the microorganisms on the surface access to their food source, so that they cannot survive permanently.

For further information on the wide range of applications for NP® protective coatings, please contact the company based in Schwalbach/Germany: info@nanopool.eu